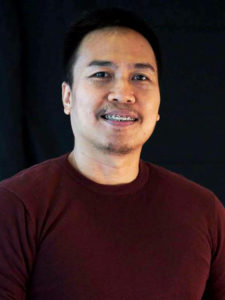 GERARDO CALAGUI is a Filipino filmmaker who works as a director, production designer, and producer for commercials, creative events, and indie movies. He finished his Bachelor’s degree in Film and Audiovisual Communication at the University of the Philippines. His thesis, a short documentary, was a finalist at the ABC 5 “Dokyu” student tilt.He trained in writing for soap with ABS-CBN’s Star Cinema and continued to work as production designer for which he was nominated at the Cinema One Originals Digital Film Festival in 2013 for “Bendor” and at the Star Awards for Movies in 2015 for “Mandirigma.” In the same year he was awarded best in pro- duction design for “Of Sinners And Saints” in Filipino New Cinema, the Filipino competing section of World Premieres Film Festival.

Gerardo Calagui collaborated with Bianca Balbuena of Epic Media as producer and Manny Marinay as executive producer to direct the film, “Those Long- Haired Nights”

As a production designer and a film director he sees stories as a way of connecting to the self and making sense of events. His film, Those Long Haired Nights is his first film foray into gender topics that involve Filipino transgenders. Through the film, Gerardo Calagui hopes to engage in discussions of gender identity and it’s local nuances.